Historian Sven Beckert’s widely acclaimed book, Empire of Cotton: A New History of Global Capitalism, is a good agrarian, business, and labour history of a single commodity. But as economic history it’s not so good.

I think many readers are disarmed by the book’s magisterial sweep across time and space, which obscures or subdues its underlying thesis. Yet when you remove the dense narrative detail, there remains an ambitious polemic about the political economy of global development. So I have tried to capture the essence of that polemic in about a thousand words — without ever mentioning that dread white fibre.

Note: the following are NOT my thoughts. It’s my summary of Beckert’s book.

The West got rich by impoverishing the Rest.

“War capitalism” was the violent exploitation of the non-West through piracy, enslavement, theft of natural resources, and the physical seizure of markets. It was not caused by superior technology or organisation. Nor did it rest on “offering superior goods at good prices”, such as you find in the la-la-land of economics textbooks, but on the “military subjugation of competitors and a coercive European mercantile presence in many regions of the world”.

Europe had little to offer the world other than some itchy fabrics. And oats. So Europeans profited as the global mafioso middleman skimming the freight between Asia, Africa, and the Americas. Europeans shoved aside Asian merchants and controlled Asian producers directly as both political rulers and monopsonist-buyers. The precious goods from the now-impoverished Asian artisans were paid for (at laughable prices) with the only thing of value the Europeans offered, the gold and the silver stolen from the dispossessed natives of the Americas. The Asian goods were then exchanged for millions of African slaves, who themselves would produce in the Americas the only non-bullion stuff that anyone ever wanted from Europeans.

“War capitalism” was a precondition for the Industrial Revolution. It created markets abroad. It supplied essential raw materials made by slaves and other bonded labour. It accumulated capital which funded the new industries. And it was the foundation on which were built the institutions public and private which led to the Industrial Revolution. Even the new technologies invented during the IR would have been for nought without the markets first seized and opened by “war capitalism”.

Equally crucial to the Industrial Revolution was a domestic “war capitalism” — a powerful state compelled self-sufficient peasants and cottage industrialists in the countryside into becoming a wage proletariat. Without this there would have been no labour for the capitalists. 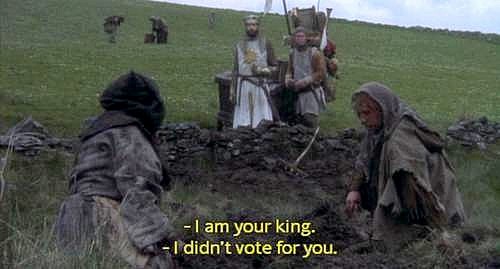 Therefore it was not technology but the role of the powerful state which was the distinguishing feature of the Industrial Revolution. New social relations — the transition from personal relations & customary rules to impersonal exchange and anonymous institutions — would have been impossible without this political intervention.

As the industrial revolution progressed, “war capitalism” transitioned to industrial capitalism, at least at home, with its rule of law and formal commercial relations. But “war capitalism” continued abroad. Industrial growth required the power of the imperial state to open markets across the world as the vent for surplus production. The violent opening of foreign markets deindustrialised the Rest by destroying their traditional industries.

The imperial state also crucially aided industrial capitalism by “enclosing the global countryside”. The domestic commodification of labour had to be followed by an international commodification of labour for this process to work. Just as the “market society” had been created in Europe by the powerful hegemonic state, so the powerful imperial state introduced capitalist social relations to the rest of the world.

In the new international division of labour, previously self-sufficient peasants in the Rest were ripped from their traditional modes of living. Risk-averse peasants preferred growing subsistence crops and supplementing their income with handicrafts. They were unwilling to become an agricultural wage proletariat. So the imperial state taxed them; made them tenants and sharecroppers; turned their commons into private plots; built railroads and ports on top of them; and wiped out the market for handicrafts through mechanised competition.

Peasants were compelled to become monocultural suppliers of raw materials to the metropolitan manufacturers. At the same time, they would also become consumers of the manufactured output of the metropolis. The result was dependence on low wages, predation by rural loansharks, and subjection to the vagaries of the international commodities market. Thanks to this coerced integration with global capitalism, millions fell victim to famine in the late 19th century.

None of this global “great transformation” was some ‘natural’ outcome of market forces. It was an invention, a deliberate ‘reimagining’, accomplished by powerful western states.

Western colonial powers then “kicked away the ladder” of economic development by imposing “free trade imperialism” on the colonies and thus foreclosing any possibility of infant industry protection. Import competition did not spur colonial industries to mechanise and compete with imports. Many parts of the non-European world had once had the prerequisites for an industrial revolution, but the missing element was state capacity. It was destroyed by European “war capitalism”.

The colonised peoples could not benefit from the support of an indigenous “developmental state”. When nascent capitalists did finally appear in the colonies thanks to the advantage of low wages, they were actively undermined by the imperial state who catered to the interests of the metropolitan manufacturers. The Rest remained poor and backward.

The emergence of industrial capitalism in the West was therefore fundamentally zero-sum, coming at the expense of its emergence in the Rest.

But this could not remain true forever. Workers in the “Global North” struggled against capitalists to improve their wages and working conditions. It was their political struggle and collective action which led to the improvement in their living standards. This in turn increased labour costs for metropolitan manufacturers, and made the products of the “Global South” more competitive as the wage gap widened further.

But the most important event in the economic resurrection of the Rest was decolonisation. Indigenous capitalists, who had played a crucial role in independence movements, were finally able to get a “developmental state” of their own to look out for their interests. Now the “Global South” could at last practise import substitution and infant industry protection. This precedent had already been powerfully suggested by Japan in the late 19th century, which was never colonised, and whose government could plan and steer the country toward industrialisation, especially by practising “war capitalism” in Asia.

Contrary to many observers, there was a lot of growth and industrialisation in the post-colonial period.

In other words, the Beckert recipe is:

One might modify Ecclesiastes and observe, “There is never anything new under the sun”.

Since African slavery and the Atlantic economy have gotten so much attention in the reviews of The Empire of Cotton, I have tried to stress the aspects of EOC so obviously inspired by Polanyi and various neo-Marxists. But I think the book is really, truly, powerfully pervaded by Polanyi. In fact today most historians are neo-Polanyists, since they are too cynical for Marxian optimism and utopianism.

40 Responses to Sven Beckert’s Empire of Cotton: A Reductionist Summary