Edward Baptist, the author of The Half Has Never Been Told, has been claiming since the publication of his book that a putative post-Emancipation drop in overall agricultural productivity in the American South is proof that it was torture, not new cotton cultivars and frontier soils, which had been largely responsible for the US cotton boom of 1800-60. But there are severe limitations to what the cliometric literature on slavery can reveal about post-Emancipation productivity specifically in cotton-picking.

The nature of the “Baptist Question”

In The Half Has Never Been Told the Cornell historian Edward Baptist attributed the very large increase in cotton-picking rates by slaves in the American south to the scientific application of torture in the gang labour system. Baptist ignored more than dismissed the statistical case made earlier by Olmstead & Rhode that the 400% increase (from 25 lbs. to 100 lbs.) in the raw cotton picked per day per slave between 1800 and 1860 was made possible by the introduction of new seeds with higher yields producing easier-to-pick plants, in the fertile frontier soils of the New South.

[For details, see my post “Plant breeding…drove cotton productivity gains in the US South”.]

In Baptism by Blood Cotton, I acknowledged that the extra cotton that was grown had to be picked by someone, even if the higher yield was due to better plants and better soils. Nobody disputes that technology and (coerced) labour were complements. Absolutely no one disputes that slaves were forced to work harder than they would have done had they been free. Nobody disputes the violent coercion part of this story (even if Baptist appears to think his critics do deny it).

But according to O & R, the new cotton varieties produced lint of longer staple length, with some varieties producing taller, and therefore easier-to-pick, plants with more bolls containing more lint. In that case, there was simply more cotton to pick for any given level of work effort induced by the lash. Recently Brad Hansen put the choices quite well :

“There are essentially two ways that this increase [in cotton picked] over time could have occurred. First, slaves could have been forced to pick closer to the maximum that they were physically capable of. Second, the maximum that they were physically capable of picking increased over time. O & R argue for the second explanation. Improved plants enabled slaves to pick more cotton in a given amount of time. In other words, slaveholders used physical coercion to force slaves to pick at maximum picking rates and through plant breeding they were able to increase this maximum amount that a person was physically capable of picking overtime.”

So it’s a question of which factor predominates in that 400% increase in daily cotton-picking rates: [a] slaves were made to pick closer to their physical maximum; or [b] the biological maximum was raised by new seeds and soils.

Baptist contends that in the traditional ‘task’ system, slaves were less supervised and therefore their labour was less than fully utilised. The gang system moved the utilisation of slave labour closer to full capacity. But it’s difficult to believe slaves had been so under-utilised in the Old South relative to maximum physical potential that you could raise utilisation rates by 400% ! (Baptist now says he does not discount the seeds explanation as partial, but in the book he barely mentions it and dismisses it in the footnotes.)

In the aftermath of his book’s publication, Baptist faced some harsh criticisms, especially about his garbling of economics. See for example Burnard (with response from Baptist and counter-response); as well as the roundtable reviews in the Journal of Economic History [ungated version], with Olmstead particularly severe in his critique; and recently Clegg which, for some of its arguments, cites my own critique. Also see the multiple blogposts by the economic historian Brad Hansen [1, 2, 3, 4].

Partly in response to such criticisms, Baptist has been loudly arguing that the decline in southern agricultural productivity after the war ‘destroys’ Olmstead & Rhode’s botanical argument. See his Twitter pronunciamentos: 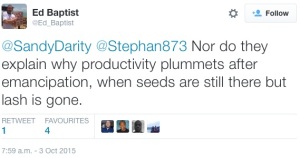 And also some of his comments at the Junto blog:

“One problem here is the critique of the cotton productivity argument. Post bellum sharecropping was actually notoriously unproductive. See Fogel, who calculates a 40% drop in productivity”.

Unfortunately, the Baptist Question can not be satisfactorily addressed by citations from the cliometric slavery debates of the 1970s and 1980s, especially regarding the effects of Emancipation. Their focus was too macro and rarely cotton-specific; and there are just too many uncertainties in their estimates of aggregate productivity to settle the decidedly micro question of cotton picking rates. As I argued previously, you need evidence from direct observation of how much cotton was picked or pickable per day or per hour for freedmen.

(Ransom & Sutch dispute there was a post-emancipation drop in productivity. See my note in the comments section.)

Which productivity are you talking about ?

There is a lot of loose talk of ‘productivity’ by historians who really need to understand the following (very elementary) distinctions in its meaning:

Today, when most people talk about productivity, they usually mean labour productivity in the sense of output per worker-hour. But the slavery debate initiated by Time on the Cross was couched in terms of TFP — the cliometricians of the era were arguing about the North-South differences in total factor productivity for the year 1860. By contrast, the productivity estimated by Olmstead & Rhode is output (cotton picked) per worker per day on southern farms between 1800 and 1860.

Care needs to be taken in comparing all these things. You can have land productivity rising while labour productivity is falling, with no net gain in TFP. You can also have the reverse.

The distinction between daily and hourly productivity can make a big difference. Everyone is so impressed with the 400% increase in productivity. But suppose the slave work day picking cotton (as opposed to doing other things) rose from 8 hours/day to 12 hours/day at the same time. Then already the labour productivity growth is reduced to 270% (100/12 ÷ 25/8) !!!

Then there is the distinction between the productivity of the agricultural sector as a whole and the crop-specific productivity for cotton. Most of the cliometric slavery debate focused on all-agriculture productivity. Of course cotton was an important part of the southern economy, but it was still less than 30% of its total agricultural output (TOC2, pp 131-138, WCC-TP1 pg 262n). So you cannot simply deduce changes in crop-specific productivity from changes in sectoral productivity — especially on farms where many crops were grown at any given time — at least not without having some detailed data on the allocation of labour time to specific crops within individual farms. So even in the case of large plantations where 60% of the monetary value of output was derived from cotton (WCC-TP1 pg 254; small farms cotton share: 29%), you still can not infer how much labour-time was devoted to producing that crop and therefore you can not infer the cotton-specific labour productivity from the all-crop information.

( However, there is an alternate method, the price dual, for estimating productivity changes for a single crop like cotton. I leave this as a note in the comments section.).

Further micro-evidence on how long it took to pick cotton

In my earlier post I presented some evidence from the 1930s about how much labour-time was required to hand-pick a pound of raw cotton just before picking became mechanised. That evidence is consistent with Whatley 1987 which found that the “average picking rate of 125 pounds of seed cotton per 10-hour man-day is the quote found most frequently” in US Department of Agriculture bulletins of the 1930s. Neither seems terribly far removed from the average of 100 lbs. in 1860 found by Olmstead & Rhode.

Both are also consistent with other evidence. From Craig and Weiss, “Hours at Work and Total Factor Productivity Growth in the Nineteenth-Century U.S. Agricuture” (chapter 1 of New Frontiers in Agricultural History; my uploaded PDF copy):

According to the above, the amount of labour-time required to produce 100 lbs of cotton lint steadily declined. Of course, it’s not the same as picking rates of raw seed cotton.

However, recently the economic historian Trevon Logan (Logan 2015) published manual cotton-picking rates from 1952-65 on the Mississippi farm belonging to his own sharecropping grandfather:

“The cotton picking books retained by my deceased paternal grandparents are quite detailed and allow me to estimate the individual productivity of nine children who were involved in intensive manual cotton picking from 1952 to 1965. This rich quantitative data forms the basis for this study. In addition to estimating the overall productivity (pounds of cotton picked per person per day), I also use the records to investigate gender differences in agricultural productivity.

“On average, children in the Logan family picked approximately 120 pounds of cotton per person per day in their late teen years. These estimates are quite similar to recent estimates of slave productivity produced by Olmstead and Rhode (2010), who calculate productivity using detailed plantation records from the late antebellum era from the same region. On average, the children in the Logan family were more than 95% as productive as their enslaved predecessors in the field. Gender differences in productivity were quite small within the Logan family, disappearing almost entirely by late pubescence. Given that the method of picking cotton was largely unchanged over time — both the enslaved and Logan children picked cotton by hand in a process that underwent very little technological innovation — the estimates imply that the extraordinary productivity of slaves persisted long after Emancipation.”

Conveniently, Logan 2015 reproduces some of the methods of Olmstead & Rhode, and the picking rates are expressed as percentage of slave averages recorded by O&R: 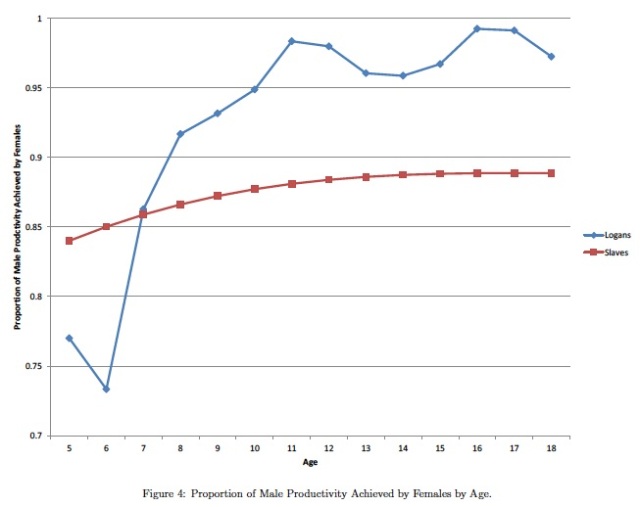 It must be kept in mind, the above picking rates should not be considered completely comparable with those of antebellum slave plantations. First, the cotton plants in the 1950s may have had an intrinsically higher biological yield than those of 1860. Second, the incentives might have been very different — global cotton prices were lower than a century earlier. And as Logan himself points out, the cotton seeds were a separate source of revenue for the Logan family. Finally — of course — this is just one family.

Nonetheless you can not blithely assume that cotton-picking rates collapsed with the abolition of slavery.

For more on productivity issues from the cliometric literature, see the notes in the comments section (very tedious).

Was slavery necessary to western industrialisation?

www.pseudoerasmus.com
View all posts by pseudoerasmus →
This entry was posted in cotton, Edward Baptist, historians of capitalism, Slavery, The Half has never been told and tagged cotton, Edward Baptist, Emancipation, historians of capitalism, Robert Fogel, Slavery, Stanley Engerman, The Half has never been told, Time on the Cross, Without Consent or Contract. Bookmark the permalink.